Saturday (01/19/2017), Widyatama University once again won special and talented students to become Widyatama Student Ambassador (WSA) in the period of 2018-2019. Widyatama Student Ambasador is expected to be able to represent Widyatyama University and can be a role model for other students besides that it is also able to develop critical thinking skills that are responsible for providing services to universities and communities and promoting the university’s positive image. 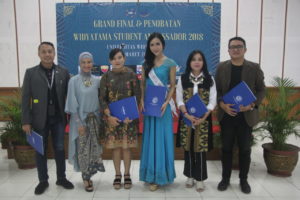 The activity held at the Widyatama Universit, A Building at Seminar Room 4th floor, was opened by a speech from the Secretary of the Widyatama Foundation Drs. H. Lili Irahali and inaugurated by Widyatama University Chancellor Dr. Islahuzzaman, S.E., M.Sc., Ak., CA. At the time the coronation was attended by an invitation both internal and external including the Chancellor, Widyatama Foundation, the Bureau Heads and the Dean of Faculties at Widyatama. And there were external representatives of campus ambassadors from other universities in Bandung including UNISBA, UNPAS, STKS, PPBS UPI and parents from all WSA also attended the coronation. 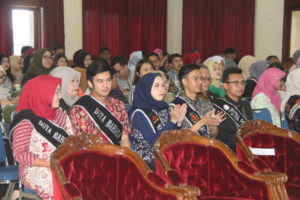