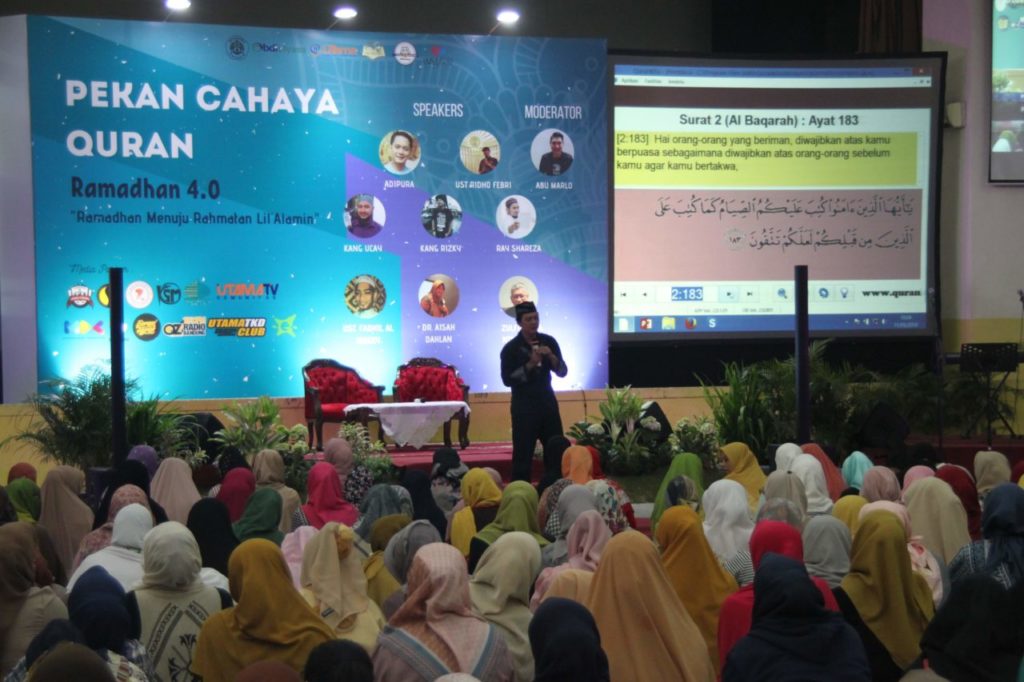 The hype of the holy month of Ramadan 1440 H was very festive. And so was with the excitement at Widyatama University. To increase the faith of all Academics in terms of preaching and actualizing identity as a person who is beneficial to others. Spreading love for fellow humans and increasing humility in the eyes of God, this year the Widyatama Foundation held an annual event in the holy month of Ramadhan, the Pekan Cahaya Qur’an 2019 (PCQ).

The activity initiated by Yayasan Widyatama in collaboration with the Abditriyasa Foundation held a variety of activities for 3 days starting on 11-13 May 2019 at the Widyatama Building (GSG) Widyatama. Carrying the theme of Ramadan 4.0 “Ramadhan Towards Rahmatan lil’Alamin” The activity was attended by all lecturers, administrative staff and representatives of the Widyatama University academic students. 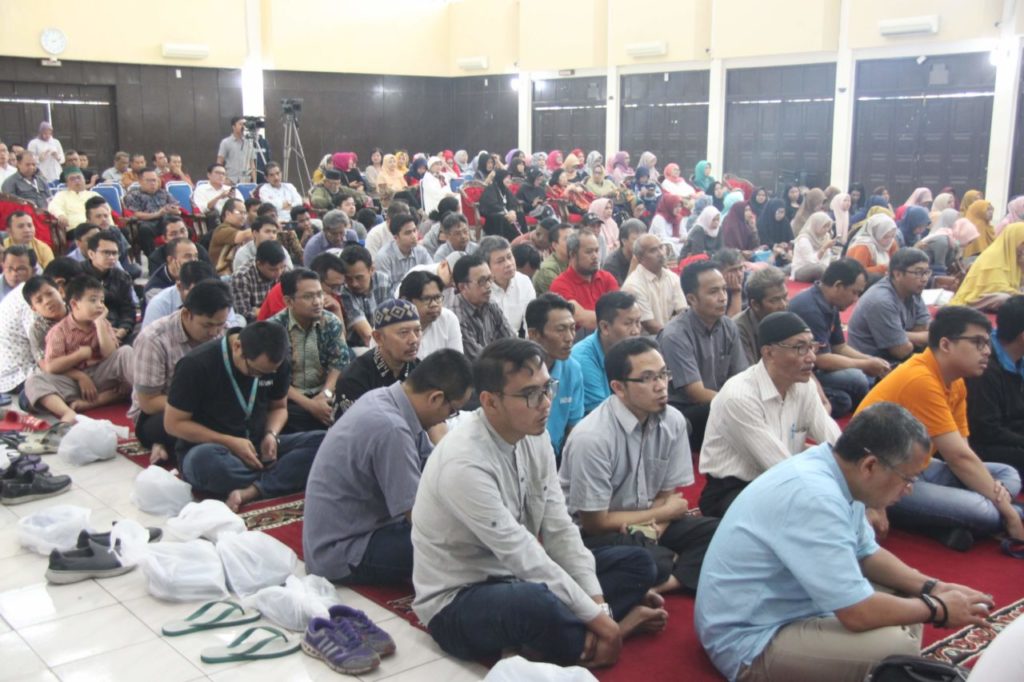 Entering its sixth year, this time PCQ was enlivened by speakers who were very familiar and often appeared on the screen and also inspiring figures. Call it veteran actor Adipura, two Ex-Pop Punk Rocket Band Rocker personnel Noor Al-Kautsar (Vocalist) and Rizky Fadli (Guitarist), Ex. The vocalist of Pop Nineball, acting as moderator of Abu Marlo who is an entertainer, Practitioner Neora Parenting & performer “Islam Is Beautiful” Dr. Aisah Dahlan and other speakers.

The first day (11/5), PCQ was filled by Kawakan Actor Adipura. The actor who often played an antagonist, Adipura Prabahaswara, apparently had another side to his life. Unlike the evil nature that is usually seen, this 49-year-old man fulfills his life by spreading noble values. 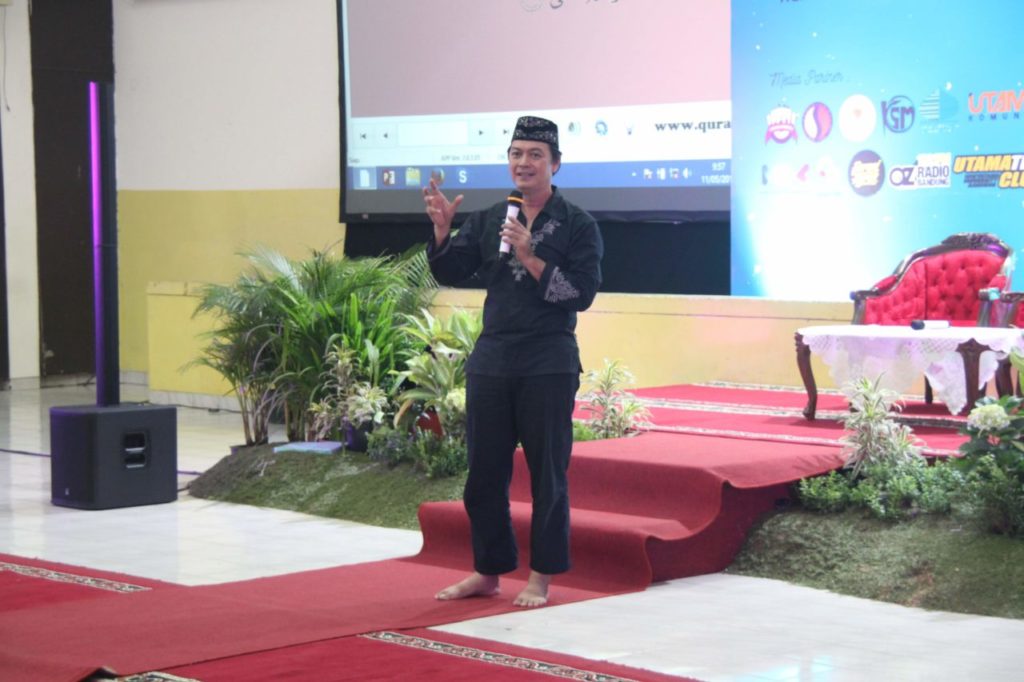 In his tausiyah, he examined that the Holy Qur’an can improve brain function. As Allah SWT said in the letter Az-Zumar (23), Al Baqarah (97), Al Ankabut (49), An Najm (11) and Ta Ha (2). He concluded that when reading the Qur’an, the whole brain will vibrate, while when the brain vibrates the brain’s ability is at the peak of its best abilities, ranging from improving memory to analyzing.

Tausiah continued with the second guest speaker from the Brave Hijrah Founder Uts Ridho Febri. He explained that it was the precariousness of the Age of Jahiliyah before the Prophet Muhammad was sent. He invites to reflect on where our role is now? in the fact that Allah is misled and the murkaikah or class that Allah points to the right path as we always pray? 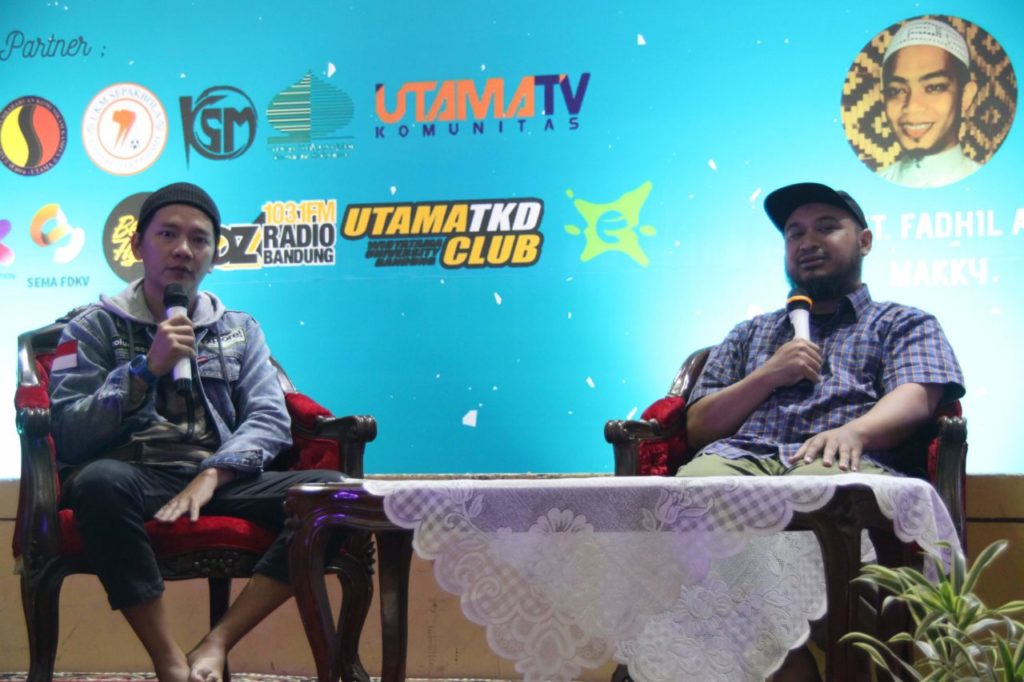 At his preach, Noor Al-Kautsar or familiarly called Kang Ucay mentioned the reason for his migration was none other than being touched by the words of Allah in the verse of the Qur’an, Az Zariyat (56) “And I did not create jinn and humans but they served to me “. Men who have served as the musician for 13 years feel sorry for taking too long a Muslim’s status as an identity. Within a dozen years, Ucay was listed as the author of music magazines and radio broadcasters.

While Rizky said “the reason for emigrating is nothing else because he feels he has contracted 3 viruses that have damaged his Islamic faith during his career, namely secularism, liberalism, pluralism. “After being left behind by Ucay in 2013, Rocket Rockers’ career has skyrocketed, which is what drowned me even further away from Islam”. He said.

Until finally in 2016, Rizky experienced a life trial when his mother was afflicted by a health problem that almost claimed his life, fear of losing a mother who had been abandoned because he was busy with music business that moved Rizky slowly toward the gate to move back to the road Allah is pleased. His peak in 2018 was a vacuum in the music world and emigrated. 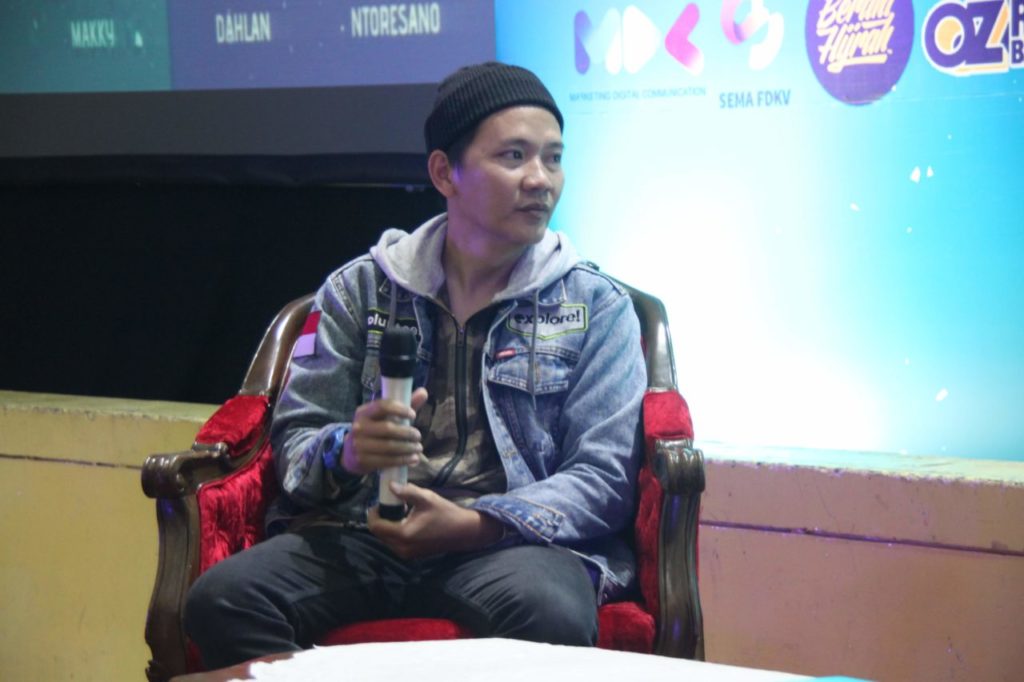 Both of them are currently active as volunteers “explore humanity”, a humanitarian organization that cares for Muslim brothers and sisters in Palestine and Syria.

Not much different from the previous speakers, Ust Rayz, who is no stranger to decorating the screen as Ustadz, also shared his hijrah experience.

The former vocalist of Nineball Band decided to leave the entertainment world when his career was at a peak. He chose to move and leave the band who raised his name.

Throughout his career, Ray claimed to not get peace. He feels that his success and happiness in the entertainment world is very short. Ray tried to find real calm and began to deepen his religion and decided to migrate in 2009.

“To be sure, this is yes. So, I used to have a dream of success when I thought of becoming an entertainer when Nineball was at the peak of success, “he said

The PCQ event closed the last day (11/5) with tausiah by  Ustadz Fadhil Al Makky, he conveyed the Qur’an down in the midst of critical infidels. With the Al Quran language that is strong from all sides of the field of science, with the permission of Allah SWT the ignorance of the infidels can be completed by the leadership of the Prophet Muhammad and his companions.

He also said that with the technology that is developing at this time, special attention needs to be given to young people, especially those who have just had offspring so that the Qur’an can continue to be eternal. “Education needs to be given to children from an early age with a more up to date Al Quran learning method by utilizing technology so that generations of millennials can be eager to learn to study the scriptures”.

The congregation which is dominated by women is very enthusiastic to welcome the next speaker, Dr. Aisah Dahlan. Doctors who also care about the prevention of victims of narcotics, at the PCQ program, discussed how “powerful” Islamic teachings affect the work function of the body, especially the human brain.

At the beginning of his lecture he conveyed that after further investigation, it turned out that the human brain was seen from various angles such as “prostrate”. The human brain consists of “animal properties” consisting of the emotional brain or medically called the limbrik system which is also possessed by mammalian animals, while the stem brain is also owned by reptile animals. By the coolness of humans when born on earth it is recommended to do Aqiqah so that their animal nature can be released. In addition, in Islamic teachings the sentence thayyibah (tasbih, tahmid, takbir, tahlil) is believed to be able to eliminate animal nature.

Rasulullah SAW said “Whoever routinely reads Sitighfar then Allah will give a solution to each of his difficulties, the solution to each problem, and HE will give him sustenance from an unexpected path” (Narrated by Abu Dawud, Ibn Majah, Hakim and Baihaqi).

He added According to neuroscience experts, cells of the human body like the word basmallah and sholawat the prophet the most because they can activate stem cells.

The PCQ activities were enlivened with a variety of tenants bazzar on the Widyatama multipurpose building yard.