Under the leadership of Prof. Obsatar Sinaga, Widyatama University (UTama) Bandung City, continues to make proud achievements and brings the UTama campus to a higher quality.

This is based on the decision of BAN-PT No. 1134/SK/BAN-PT/SURV-BDG/PT/XII/2021. Signed by the Director of the Executive Board of BAN-PT, Prof. Arif Purbayanto, Ph.D.

Mainly, at the beginning of 2022, the Management Doctoral Study Program (Prodi) has been opened.

Of course, this achievement has gone through various measurable processes and breakthroughs, such as being a campus pioneer implementing hybrid learning.

Before being appointed as a pilot campus for the Independent Learning Campus Merdeka (MBKM) program by LLDIKTI Region IV, under the leadership of Prof. Obi, as he is called, hybrid learning has been held, including via a server (online).

In a week, UTama students can choose face-to-face lectures with lecturers for only two days. The rest can deepen their knowledge outside of campus. Adapted to their competence or interest in their field.

Another breakthrough is that graduation requirements in the form of a UTama student final project are not only determined through a thesis. But you can also make a business plan and write articles/papers (research results) published in international journals.

Another achievement, as of September 2021, has published approximately 1,500 articles, with 272 lecturers in Scopus indexed international journals. Because UTama also continues to strive to become a research and research-based campus.

The activities of UTama lecturers and students were also carried out massively in various regions. The goal is to try to help the government and the community, solve existing problems through community service activities (PKM).

UTama was also appointed as a pilot career center for universities throughout Indonesia. Organizing the implementation of a career center service development program and an advanced career center (tracer study), at the Directorate of Student Affairs, Directorate General of Learning and Student Affairs, Ministry of Education and Culture, Research and Technology. The goal is for UTama students to be quickly absorbed in working in the business and industrial world.

In terms of the ranking of the Ministry of Education and Culture, Research and Technology, since being led by Prof. Obi, the increase has been very significant. Previously, it was ranked in the 200s, in less than three years it was ranked 42, a quality private-public university in Indonesia. Meanwhile, for the SINTA – Science and Technology ranking, UTama was ranked 41 nationally.

In Bandung, UTama has succeeded in becoming the 1st private campus according to Webometrics’ version.

As for Prof Obi’s achievements, including being the second world champion in the “International Conference and Exposition on Inventions by Institutions of Higher Learning” event organized by the Ministry of Education of Malaysia, in 2019. In addition to being the Chair of the Promoter during Megawati Soekarnoputri, The 5th President of the Republic of Indonesia, received an Honoris Causa Doctorate from UNPAD, in 2016.

Other awards received prestigious awards, from the Indonesia Development Achievement Foundation (IDAF) as “Indonesia MOST Admired Education Award 2021”. Prof. Obi, assessed for being an inspiration in providing educational innovations in higher education.

“This is a special gift on the 49th anniversary of the Widyatama Foundation. Hopefully, with this superior position, the recognition from the community towards UTama will increase,” said Djoko, in his office, Jalan Cikutra No 204-A, Thursday (13/1/2022)

It is hoped that the quality of education will continue to improve as it goes on. Including the commitment to the implementation of higher education that has graduates who are competent in science and have good morals.

“This achievement shows the commitment of the Chancellor, Prof. Obsatar Sinaga, and his staff to achieve this. Main to being superior is not easy. Because many parameters must be met, such as management performance, the tri dharma of lecturers, student performance is measured. This shows that the continuity of the UTama academic process has been qualified, this is a good provision in the coming year, “said Djoko.
It also has the DJITU philosophy, which is disciplined, honest, innovative, diligent, and tenacious.

It is hoped that in the future students who want to continue their studies will not hesitate to study at UTama.

In line with Djoko, the newly appointed Head of LLDIKTI Region IV, M Samsuri is also proud of UTama’s achievement in winning the superior predicate from BAN-PT.

“As an institution that serves related to institutional lecturers and others, I feel proud. The highest appreciation to Widyatama University, can be a motivation for other universities to increase their accreditation grades to become superior accreditations,” said Samsuri, recently. 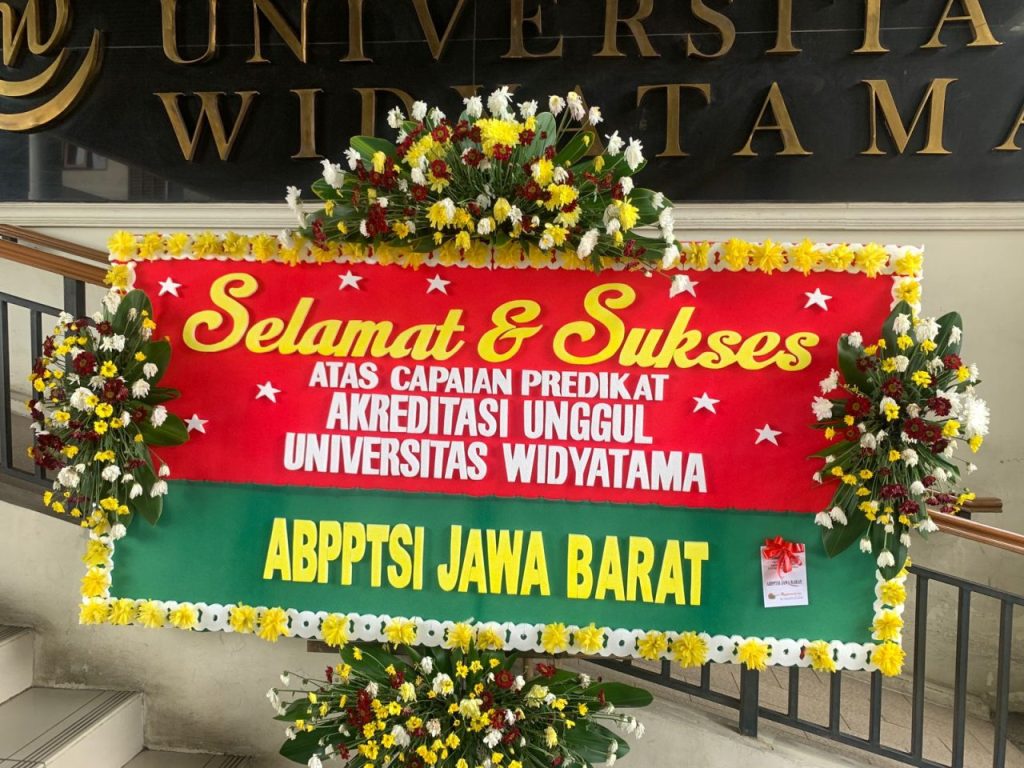 He also advised that with the predicate of excellence, it should not only be an institutional branding but hoped that it would manifest in the learning process and the quality of its graduates. That is easily accepted in the world of work or able to open job vacancies. Also, these human resources can be involved in the community because they have good character.

“Of course the biggest hope motivates Widyatama University, to prove that it is not wrong to get superior accreditation, to have number one quality graduates,” said Samsuri.He has strongly mentioned the presence of the Management Doctoral Study Program at UTama, according to him it was a gift.

“In the sense of reward for the hard work of Widyatama University so far, it has become one of the universities that has a good learning process. In addition, it has a good compliance test in reporting in the university database. Obey the principle,” said Samsuri.

He continued, with the S3 UTama Study Program, because it was already feasible. All requirements are met, lecturers are prepared, adding to the spirit of UTama not only trying to produce quality undergraduate and postgraduate graduates but also qualified doctoral graduates as well.

“Congratulations to Widyatama University, make it a motivation to give birth to excellent graduates and have Pancasila character,” he concluded.